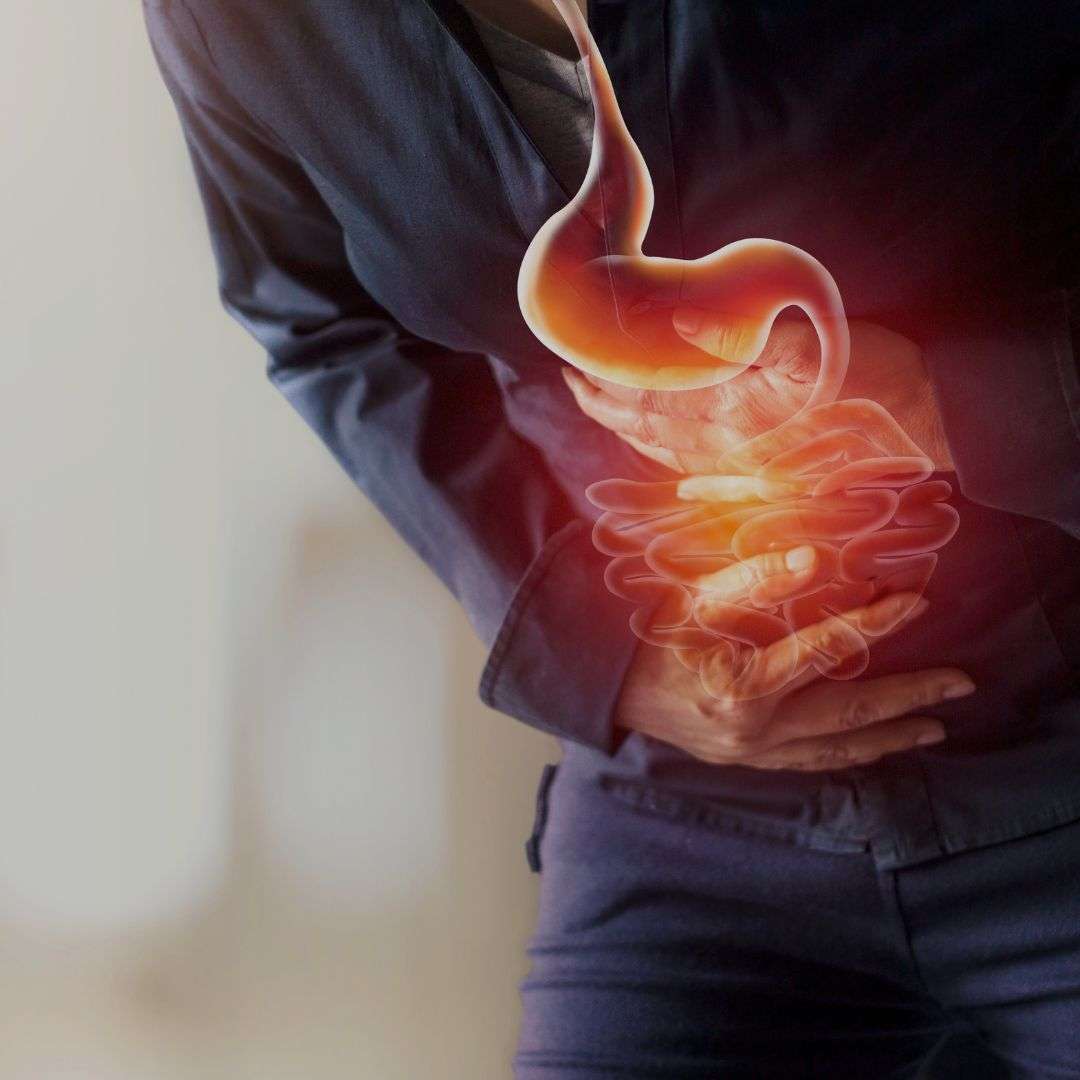 Gastroparesis is defined as delayed emptying of solids and liquids from the stomach into the small intestine without evidence of a blockage. However, some patients have the symptoms of gastroparesis without delayed gastric emptying.

Although it is unknown why gastroparesis occurs, it is thought that it occurs from damage to the various branches of the nervous system in the body.

There are three main parts of the nervous system thought to be involved with gastroparesis symptoms:

The symptoms of gastroparesis include abdominal discomfort, heartburn, nausea, vomiting, bloating, feeling full quickly and/or excessively full after eating. Some patients, in addition to the symptoms above, may also experience urinary symptoms such as frequency, decreased bladder sensation and difficulty emptying.1

When the symptoms of gastroparesis occur, either chronically or episodically, complications can arise. Some people may develop dehydration, electrolyte imbalances, bacteria overgrowth, blood sugar abnormalities, malnutrition and/or a mass called a bezoar.

Gastroparesis is associated with other conditions such as multiple sclerosis, diabetes mellitus and Parkinson’s disease. Diabetes, a metabolic disorder, can cause or exacerbate existing gastroparesis due to high blood sugar and/or nervous system(s) damage. Certain medications, such as tricyclic antidepressants or opioids and previous gastrointestinal surgery can lead to gastroparesis.

How is Gastroparesis Diagnosed?

Gastroparesis is most often diagnosed by a gastric emptying study. For this test, a person will ingest a meal that contains radioactive material which is followed by a series of x-rays taken at 1 hour, 2 hours and 4 hours. The goal of the study is to see how long it takes food to move from the stomach into the intestine. A person is diagnosed with gastroparesis if 60% or more of the food remains in the stomach after 2 hours of eating or greater than 10% of the food remains in the stomach after 4 hours. Other tests such as breath tests, wireless capsule testing or measurement of gastric electrical activity can help diagnose patients with gastroparesis symptoms.

How Are Migraine and Gastroparesis Related?

A study of 10 people with migraine with aura were compared to a control group to determine if there were differences in gastric emptying. The study found those with migraine met the criteria for gastroparesis during (78%) and in between migraine attacks (80%). The study also found that those with migraine who were in-between attacks took over an hour longer to empty their stomach than controls (188.8 vs 111.8 minutes).2

Secondly, a study of 27 episodic migraine patients, 12 controls and 32 patients with functional dyspepsia were studied to determine if there were differences in gastric emptying.3 Migraine patients were excluded if they had dyspeptic symptoms (such as epigastric pain or discomfort, postprandial fullness, early satiety, nausea, vomiting and abdominal bloating, etc.) between attacks.3 They found no differences in gastric emptying between controls and those with migraine.3

A third study evaluated gastric emptying of liquids and found that it was delayed during a migraine attack but did not differ between attacks.4 These findings may be related in part to the interaction of branches of the nervous system (see CNS, ANS and ENS discussion above) in patients with migraine. Thus, gastroparesis may occur during an attack and possibly in-between attacks but larger studies are needed to confirm.

Migraine Symptoms and Comorbidities As They Relate to Gastroparesis

A study of individuals with gastroparesis and abdominal pain found that those who reported severe abdominal pain were more likely to have migraine than those with mild symptoms. Many people with migraine have a history of abdominal migraine and it is often comorbid with other GI conditions such as IBS and cyclic vomiting syndrome. In addition, a study of subjects with a cyclical vomiting pattern (having recurrent episodes of nausea and vomiting with symptom-free intervals) and diabetic gastroparesis (gastroparesis due to diabetes) found 47.4% of subjects had migraine compared to 20.7% of controls.8

Commonalities Between Migraine and Gastroparesis

What Treatments are Used for Migraine and Gastroparesis?

There are a few treatments that may be beneficial for both migraine and gastroparesis such as metoclopramide. This medication helps speed up gastric emptying, treats nausea and vomiting but has been found to be effective as a pain reliever. For someone with gastroparesis and migraine, it might be beneficial to use this medication over other options for nausea. However, metoclopramide is not recommended to be taken for more than 12 weeks and some patients can not tolerate its CNS effects. Domperidone was also shown to prevent migraine attacks and is used to treat gastroparesis.5 Neuromodulation devices such as non-invasive vagus nerve stimulation, have not been studied for both migraine and gastroparesis. However, it has been cleared by the FDA for the acute and preventive treatment of migraine and is undergoing clinical trials for gastroparesis. Lastly, a provider will likely opt for treatments that are administered intravenously, rectally, subcutaneously or intranasally versus orally. For a full list of migraine treatments, click here.

What Type of Doctor Should I See for Migraine and Gastroparesis?

A clinician with a headache specialty is recommended to diagnose and treat migraine. For gastroparesis diagnosis, treatment and management, a gastroenterologist is highly recommended.

It is important for patients to report the symptoms of gastroparesis to their headache specialist or primary care doctor. A provider will likely change the route of the medication they prescribe from oral to subcutaneous, intravenous, intramuscular, intranasal or rectal. Neurologists and headache specialists should be aware about gastroparesis as it is a common comorbidity of migraine. Many patients living with migraine who are not aware about gastroparesis are likely consuming medications orally and are not absorbing all of the medication. A provider may opt for treatments that are beneficial for both conditions such as metoclopramide, domperidone and non-invasive vagus nerve stimulation. More clinical trials are in progress for gastroparesis, therefore we encourage readers to routinely check clinicaltrials.gov.

Thank you to our sponsor electroCore!

Written by: Kylie Petrarca, RN, BSN Medically Reviewed by: Dr. Steven Bender Edited by: Leigh Serth What is the Trigeminal Nerve? The trigeminal nerve is the...
Read More

The Connection Between Migraine and ADHD