Voice-over: Welcome to Spotlight on Migraine, a podcast series hosted by the Association of Migraine Disorders. Through personal stories and interviews with experts, we expose the true scope of migraine by exploring symptoms, treatments, research topics, and more. This episode is brought to you in part by our generous sponsors, Amgen, Novartis, and Alder BioPharmaceuticals.

Dr. Renee Eger, an OB-GYN, summarizes contraceptive options and hormonal management for premenopausal women with migraine, including their risks and benefits.

Dr. Renee Eger: Thank you. Thank you, everybody. After such an interesting scientific session prior to this, I think that you’re going to find this pretty easy to understand and an interesting topic for an OB-GYN to be talking about because — I want to thank Dr. Godley for the invitation, but I have to say, when I received the invitation, I was asking myself, “What in the world can an OB-GYN tell otolaryngologists and neurologists and other migraine specialists about headaches?” because in my world, we don’t think about that so much. And in fact, I probably can tell you more about all of my favorite athletes than I can about headaches. So instead, I think I’m actually going to focus on what it is that I do every day as an OB-GYN and how our specialty actually looks at headaches. I have no financial disclosures.

So my learning objectives are to define the American College of Obstetrics and Gynecology’s recommendations for contraceptive options for patients with migraines and the U.S. Medical Eligibility Criteria for Contraceptive Use as it relates to migraines and migraines with aura. And then finally, I’m going to review the options for hormonal manipulation, as you refer to it, for premenopausal patients who have menstrual migraine headaches.

So as a gynecologist, many of my patient visits center around attempts to either get pregnant or to avoid pregnancy, and there are essentially three clinical scenarios I address with sexually active, reproductive-aged women. So the first is women who actually want to get pregnant, so in these instances, my objectives are to optimize a woman’s care to keep her and her fetus safe both during — before, really, and during pregnancy. And preconceptual counseling in these patients includes assessment and treatment of medical problems. With respect to migraine headache management, patients are often treated with NSAIDs, triptans, and ergot derivatives. In pregnancy — and that will probably be addressed later in this session — first-line therapy is usually acetaminophen. NSAIDs and triptans are typically used as second- and third-line treatments and are reserved for use in the second and the third trimesters. Triptans, in particular, pose the risk of vasoconstriction of the placental blood supply, with sumatriptan having the best safety profile. Ergotamine is actually absolutely contraindicated in pregnancy due to the potential to induce hypertonic uterine contractions and vasospasm or vasoconstriction.

So the second answer is for women who want to avoid pregnancy. A typical woman spends approximately 5 years of her reproductive life trying to get pregnant and the other 30 years trying to avoid it. So in fact, data fairly consistently shows that approximately half of all pregnancies are actually unintended. So we generally want to choose a contraceptive method that a patient is likely to be the most compliant with, is the most effective, and would be the safest for her.

The next most effective forms of birth control include estrogen-progestin–containing pills, which are often referred to as combined oral contraceptives. This also includes transdermal patches and vaginal rings, as well as intramuscular long-acting Depo-Provera. And these are methods with one-year typical-use failure rates of anywhere from 6 to 9%.

So approximately 28% of U.S. women use some form of hormonal contraception. Up to 25% of U.S. women are affected by migraines, largely during the reproductive years. So the question we are often asked is whether estrogen-containing contraception is safe for women who have migraine headaches. This shows the one-year prevalence of migraine headaches by age and gender. Close to 25% of reproductive-age women have regular migraines, and the peak prevalence is in women who are of reproductive age, so finding a birth control method that is safe and is effective for these women is vitally important.

Further evidence for this was published in 2017. These are the results of a national healthcare claims nested case-control study of over 25,000 ischemic strokes among reproductive-aged females. And just the use of estrogen-containing pills showed an increase in a woman’s risk of ischemic stroke. A history of a migraine headache without aura and without the use of estrogen-containing pills also increase the risk of stroke. But it was really the presence of migraine with aura that tilted the scale in terms of stroke risk. The risk of stroke was highest, with an odds ratio of over 6, in patients with migraine with aura on estrogen-containing oral contraceptives. So I think you are getting the picture here.

So how do we determine eligibility for various contraceptive methods? The U.S. Medical Eligibility Criteria for Contraceptive Use and the U.S. Selected Practice Recommendations for Contraceptive Use are guidelines which have been adapted by the CDC from the World Health Organization. They provide recommendations on the safe use of contraceptive methods for women with various medical conditions. This is actually an app that you can get on your phone, and if you don’t already have it, you should consider downloading it. The data is updated every five years and was last updated in 2016.

The recommendations are divided into four categories. So categories 1 and 2 are conditions where either no restrictions exist or the method can generally be used safely with appropriate follow-up. Categories 3 and 4 indicate the contraceptive choice poses potentially health risks to a patient and are generally not recommended.

So ACOG, or the American College of OB-GYN, recommends that at the time of contraceptive initiation, the diagnosis of migraine with or without aura should be carefully considered in all women who present with a history of headache. Combined hormonal contraception can be used in women who have migraine without aura and no other risk factors for stroke with a U.S. MEC category of 2, whereas estrogen-containing contraceptives are not recommended for women who have a migraine with aura because of the increased risk of stroke with an MEC category of 4.

So the third and the final reason we prescribe contraception is as an adjunct in the treatment of disease. Examples of this would include women who use combined oral contraceptives as a way to decrease monthly menstrual period when they have symptomatic anemia or women who use progestin-secreting IUDs to help prevent the risk of the development of endometrial hyperplasia, for example, if they have polycystic ovarian syndrome. And menstrual migraines, in my estimation, actually falls in this type of category.

So menstrual associated migraines affect approximately 8 to 14% of women. These are headaches that typically occur within two days before the onset of menses and last through the third day of menstruation. They’re almost invariably migraines without aura. Fluctuations in normal cycling estrogen and progesterone levels appears to be the trigger in the initiation of these headaches, although I look forward to what my neurology colleagues have to say about that. In particular, menstrual migraines appear to be triggered by a physiologic drop in progesterone levels at the time of menstruation — well, progesterone and estrogen both.

For patients with menstrual migraines, the use of continuous combined oral contraceptives, rings, or progestin-only oral pills, Depo-Provera, and even subdural progestin-secreting implants are all ways of eliminating normal hormonal estrogen and progesterone cycling. So rather than being contraindicated, these methods offer ways to improve headache severity and frequency. And when using oral contraceptives this way, eliminating the pill-free or placebo week is not only safe, but it also preserves a stable hormonal environment. And while progestin-secreting IUDs are safe for women who have migraines, they really are not particularly helpful in the treatment of the menstrual associated headaches.

So to summarize, ACOG and the U.S. MEC classify non-estrogen-containing contraceptive methods safe for women with migraines with or without aura. The ischemic stroke risk associated with estrogen-containing contraceptives is unacceptably high for women with migraine with aura, and effective alternatives exist for these patients desiring reliable contraception. For patients with menstrual migraines, the use of hormonal methods that allow for steady-state estradiol levels appears to be effective in mitigating and in some cases eliminating menstrual migraine altogether.

Thank you for your time.

Thank you for tuning in to Spotlight on Migraine. For more information on migraine disease, please visit MigraineDisorders.org.

This podcast is sponsored in part by Amgen/Novartis and Alder BioPharmaceuticals.

*The contents of this podcast/video are intended for general informational purposes only and do not constitute medical or legal advice; the content is not intended to be a substitute for professional medical advice, diagnosis, or treatment. Always seek the advice of a physician or other qualified health provider with any questions you may have regarding a medical condition. The speaker does not recommend or endorse any specific course of treatment, products, procedures, opinions, or other information that may be mentioned. Reliance on any information provided by this content is solely at your own risk.

Episode 38: Are Antibiotics Being Misused for Rhinosinusitis? 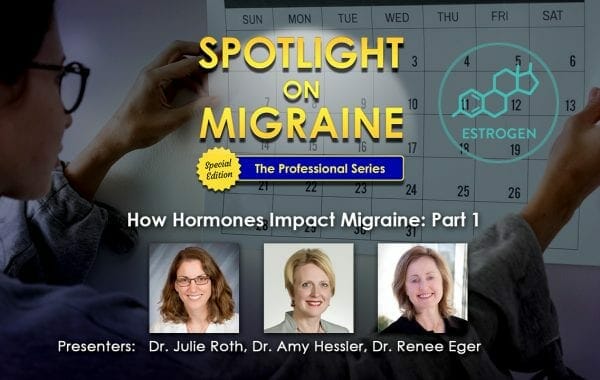 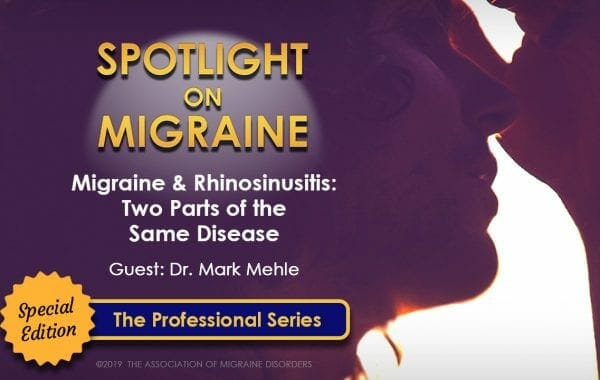