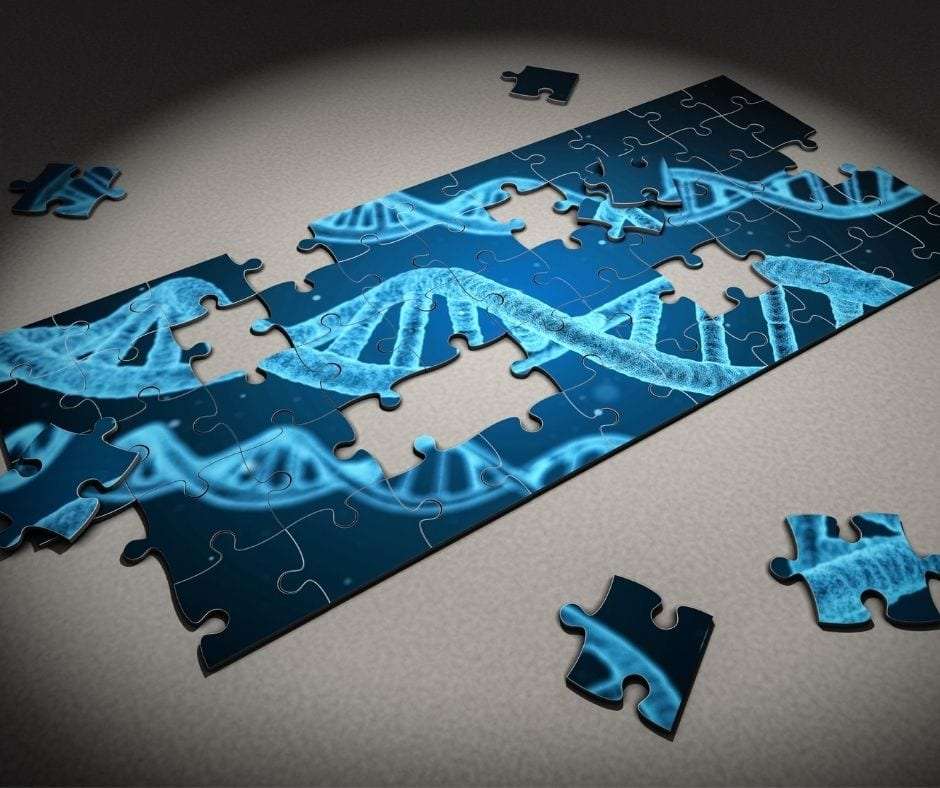 We’ve known for generations that migraine disease tends to run in families, but we haven’t understood all the ways that our genes make us susceptible to migraine attacks. Now, thanks to incredible advances in the science of human genetics, we are learning more about the complexities of migraine disease. Discoveries that seemed like science fiction not long ago are giving today’s professionals hope that someday they could potentially determine what treatments would work for you with a simple DNA swab.

What is genetic science?

Scientists started theorizing about what we think of as modern genetic science around the 1860s, studying inherited traits in animals and plants. By the 1950s, scientists had determined the basic structure of DNA, the part of each cell that carries our genetic code, but it wasn’t until the 1970s that scientists could begin to see the details of these codes.

In 1977 researchers performed the first “DNA sequencing”—the process of mapping the four substances that make up DNA. Those substances, called nucleotides, always combine in certain base pairs (adenine-with-thymine, or AT, and guanine-with-cytosine, or GC). A diagram of the DNA looks like a double-helix structure, or a spiral ladder. Those pairs of nucleotides make up the “ladder rungs” connecting the two spirals. There may be only two kinds of rungs, but there’s a near-infinite number of ways those rungs can build a particular ladder. The first DNA scientists decoded with DNA sequencing was a virus called a bacteriophage with 11 genes and about 5,000 rungs.1

Then came the genetic equivalent of the first moon landing. On February 12, 2001, two scientific journals published the details of the Human Genome Project (HGP), a decades-long international cooperative effort to decode the basic human genetic blueprint. Nearly 3,000 researchers from all over the world worked together to map the basic human genome—which has about 20,500 human genes and more than three billion base pairs or rungs.2

In the 20 years since the first publication of the Human Genome Project, our knowledge of the human genetic code has grown exponentially, including our understanding of migraine disease.

Because the stigma surrounding migraine disease was even worse in past generations, many people never heard the “m-word” growing up. Many people, however, remember stories about relatives having “sick headaches,” staying in dark, quiet rooms for hours or days at a time, or vomiting whenever they had those sick headaches.

People who get migraine attacks don’t always know their family histories, but when they do, they’re likely to see a family pattern.

Lots of migraine types—lots of genes

We usually say, “migraine disease,” but genetically, it may be more like “migraine DISEASES.” There are lots of genes involved in the migraine puzzle. The first puzzle pieces scientists figured out were for something called hemiplegic migraine, a relatively rare type of migraine attack that can cause weakness on one side of your body. That weakness might be mild or severe and doesn’t always happen on the same side where you feel the head pain. Hemiplegic migraine attacks often look like the symptoms of a stroke, which can be frightening for patients and medical professionals.

Genetic studies of families with hemiplegic migraine disease helped scientists identify the specific genes involved in that kind of migraine disease, but what about all the other kinds of migraine attacks? Enter the GWAS: genome-wide array typing. It’s like crowdsourcing the human genome. By studying many genetic blueprints and cross-referencing them with patient information, researchers are learning that other migraine subtypes are, well, complicated.

Genome-wide studies suggest that there could be about 100 or so genes that have some connection to migraine disease.3 That number isn’t set in stone, as follow-up studies get different results, but that’s the kind of ballpark we could be in.

Researchers believe that susceptibility to migraine disease is connected to what they call single nucleotide polymorphisms or SNPs. SNPs are atypical rungs on the DNA ladder. Most people might have a C rung on a given gene, but you might have a T rung. Most of the unusual rungs are in places on dormant parts of the human genome, but some are in spots that increase your risk for diseases.

If the basic human genetic blueprint has about 20,000 ladders and three billion rungs, and there are 100 or so ladders that might have defective rungs involved in migraine…that means that there are potentially thousands of combinations of these rungs that could make you susceptible to migraine disease.

This graphic from an article on migraine genetics from the Journal of Headache and Pain4 illustrates the way migraine may not be a single target, but several targets: 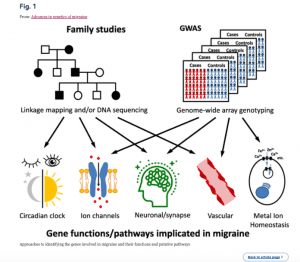 The genes suspected as migraine culprits affect several different parts of the migraine process, like the ways in which neurons talk to each other or the ways blood vessels respond to certain things. So far researchers suspect that genes connected to migraine may involve the following factors.

The complex combinations of gene defects, which vary from person to person, is why a treatment may work for one person and not another.

Zeroing in on the right targets

In the last several years, experts in migraine genetics have begun to zero in on more specific targets and the ways they impact migraine disease. One of those experts is a member of our Research Advisory Committee, William Renthal, MD, PhD, of Brigham and Women’s Hospital and Harvard University Medical School.

“…[Single-cell RNA sequencing] allows us to measure the expression of every gene within individual cells, rather than older methods that required blending many cell types together and losing track from which cells they were expressed. We can now see which nervous system cell types actually express the genes associated with increased migraine risk…

It turns out that some migraine-associated genes are expressed predominantly in a specific subtype of cells. This leads us to believe that some patients may have certain cell types that are largely responsible for their migraine. So, if you take two migraine patients with otherwise similar headaches, one might have a set of genes that causes their neurons to function abnormally and the other may have a set of genes that causes their blood vessels not dilate the right way. These genetic and physiological differences between patients may have important diagnostic and treatment implications. More research is needed, but I imagine a future where headache specialists can personalize treatments simply from a cheek swab or a blood test.”

You can see the video interview and transcript here.

The future for people with migraine disease

If Dr. Renthal and other experts can use the information from GWAS to narrow the search to particular genes, then use single-cell RNA sequencing to fine-tune their target search, they may decipher the complex codes that cause some of us to be so susceptible to migraine attacks. That could mean amazing advances in diagnosis and treatment:

The real-life burdens of migraine disease can be heavy, especially for patients who haven’t had great success with the treatments now available, but the acceleration of migraine research has given us more hope than ever.

We’ve seen more new migraine-specific treatments come to market in the last three years than we’ve seen in the previous 25 years, including the first-ever preventive treatments. If genetic researchers continue this trend, we may get personalized migraine treatment in our lifetimes. 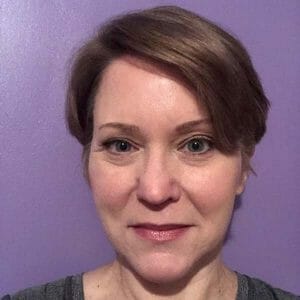 Lisa had migraine attacks for most of her adult life before being diagnosed with migraine disease. A communications strategist, writer, and former radio announcer, she lives in the Boston area, where she advocates for her fellow migraine patients every chance she gets.
Share
Tweet
Share
Pin
Pocket
Email