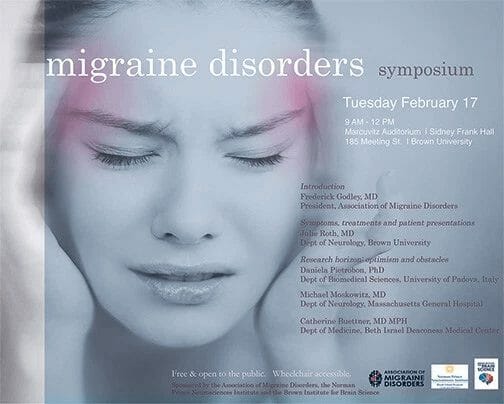 The inaugural Migraine Disorders Symposium was held on Tuesday, February 17 at the Brown Institute for Brain Science. Frederick Godley, MD provided introductory remarks about the new partnership between the Brown research center and the Association of Migraine Disorders. The featured speaker Daniela Pietrobon, PhD of Padova, Italy, an expert on calcium channel physiology was unable to attend due to the blizzard conditions on the East Coast. Julie Roth, MD, a Providence-based pediatric neurologist, included in her lecture the stories of three migraineurs who suffered unusual presentation of migraine, including a young woman who suffered a stroke and another with Alice in Wonderland syndrome. Catherine Buettner, MD, MPH, an internist and researcher at Beth Israel Deaconess Medical Center, presented the findings of her pilot study that suggested the endothelial cell-stabilizing properties of statin medication with supplemental vitamin D may prove to reduce effectively the frequency of migraine headaches. Finally, Michael Moskowitz, MD, department of Neurology at MGH, reviewed the importance of cortical spreading depression in changing our understanding of migraine pathophysiology but also described recent research that suggested a more important role of the vascular interface with the brain. He pointed out that most effective medications for migraine have not been shown to cross the blood-brain barrier.

This half-day conference appears to have underscored the value of a larger, 2-day Migraine Disorders Symposium planned for September 18-19, 2015.

Foreword for The Migraine Relief Diet is written by Frederick Godley, III, MD, FACS, President of the Association of Migraine Disorders and Michael Teixido, MD, Vice President of...
Read More

What Do I Do When I Get to the Grocery Store?

It is difficult to follow a diet based on a list of foods to avoid and the last thing you need is a difficult stressful task...
Read More

New Treatments: What’s in the Pipeline 2018 may have been a pivotal year in migraine treatment with the release of CGRP monoclonal antibodies, but that was...
Read More
×