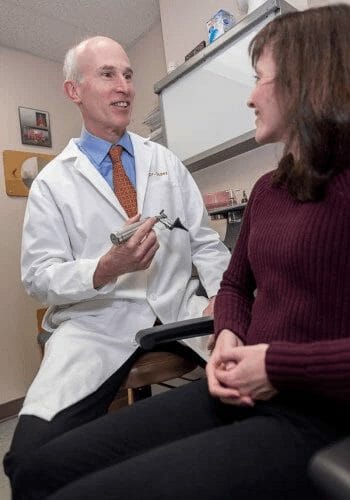 1. What is a migraine, and how can you know you’re having one?

A traditional migraine headache is an intense, throbbing pain that most people associate with the top of their heads. Those who suffer from migraines, also known as migraineurs, know a headache is coming on when they experience distortions of their vision or when their headache is accompanied by nausea, sensitivity to light or sound, or when they feel wiped out.

2. What causes migraine disease, and why does it affect disproportionate numbers of women?

Migraines are a neurological disease likely caused by genetic defects that are responsible for many different portions of the nervous system becoming over-reactive, or hypersensitive, to stimuli. The majority of migraineurs show the first signs with odd symptoms, such as abdominal migraines, muscle spasms and, possibly colic, during childhood with equal numbers of boys and girls. What makes migraine disorders particularly perplexing is that the defective nerves can be further disrupted by sex hormones, such as changes in estrogen levels. We see this effect when, during puberty the number of women who develop symptoms increases to three times the number of males – making women 70 percent of all migraine sufferers.

3. About how much lost productivity do migraines cause annually?

In an average year, 25 million work or school days are lost to migraine disorders and this is estimated to represent a $31 billion loss in productivity. This does not account for those migraineurs who try to work but are not able to function at full capacity due to pain or cognitive effects.

4. What are your primary goals for the Association of Migraine Disorders?

Our mission is to improve the diagnosis and treatment of migraine disorders by increasing education, collaboration and research to give migraine sufferers a life without pain. … Additionally, the Association of Migraine Disorders is collaborating with the Brown Institute for Brain Science to create an innovative interdisciplinary research program in Providence.

5. What improvements in migraine treatment have occurred in the last decade?

The first major improvement was a new understanding that migraine headaches were not primarily a vascular disease, but a neurological disease with secondary vascular and inflammatory consequences.